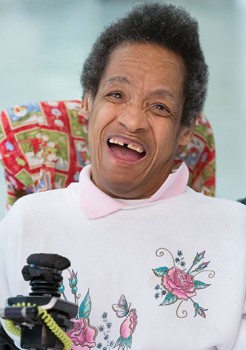 Diane Hunter is proud to be one of Inglis’ long-term residents and marks her anniversary each year with a banner on her door proclaiming, “Happy Anniversary to Me.”

But Diane is best known for her book chronicling life at Inglis House, As the Wheels Turn.

When Diane arrived at Inglis she was one of the youngest residents. “Now I am older than most of the staff,” she laughs. “And at that time, there were no computers either. Now the Computer Lab is one of the most popular places on campus!”