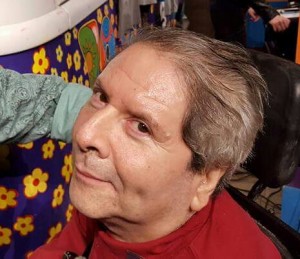 “When I was injured I had a lot of time to think. I was determined to go on and not give up. I was not going to dwell on what I could not do, but find things I could do. I was just going to do things differently.”

For nearly 30 years, Eliot Spindel has been an integral part of the Inglis Community. After sustaining his injury, Eliot spent five years in Virginia rehabilitation hospitals specializing in spinal cord injuries, Eliot needed to make a decision about his long-term future. His mother had heard about Inglis and, “It became my first choice,” he said.

Even up until his passing, Eliot always was in control of his life and made the choices he wanted to make.

From the moment he arrived at Inglis, Eliot got involved - he served on the Resident Council, including as President; he was a member of the Inglis Consumer Advisory Committee (ICAC) since its beginning in 2003 and was Vice Chairman of the Committee.

Of all the interests and loves he had, including his love of the Inglis trips to shows, concerts and restaurants and his Washington Redskins, his truly greatest love was the one he found with Robyn Monahan, another resident at Inglis.  The two had a love affair for the ages and were married in the Inglis Courtyard in 2007.  The connection they shared was quite special.  They brought out the best in each other and challenged each other each day.  They got matching tattoos, celebrated their extended families and made each other laugh with their unique senses of humor.

Eliot was known for his love and use of technology. Early on it was clear that to make the most of life, technology had to be his friend. “I was in one of the earliest vocational rehabilitation programs working with personal computers,” he said, “but I was rejected twice. At the time, they were reluctant to train people who lived in long-term care facilities because they didn’t think that they would work after they received the training. Inglis helped me appeal all the way to Harrisburg, and I got in.”

Work was a huge part of his life. Adapted Technology was the key. He was an early adopter of Dragon’s Naturally Speaking software - converting the spoken word into computer commands and soon Eliot was conducting weekly tutoring sessions in the Inglis computer lab for other residents on using the technology.

Eliot also worked as the webmaster for several of their sites, among other things. He also was the webmaster for the websites for Inglis and Inglis’ hands-free water bottle, Drink-Aide®.  Computers and other adaptive equipment did just about everything in his room — from activating the fan, lamp, stereo and bed, to serving as his telephone through Google. “Without technology, my life would be very different,” he admitted.

Without Eliot, all of our lives and the lives of all he touched, would be very different, and now are clearly diminished without his presence.  He will be greatly missed by all who knew him.

Eliot loved taking part in Inglis' trips program, especially to cultural exhibitions and performances. Eliot asked that all gifts in his memory will support this program, which is solely funded by philanthropic contributions.