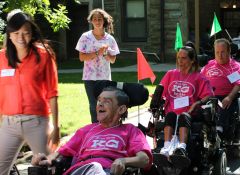 The 36th Annual Keen Games was a huge success! More than 100 athletes participated in a variety of events such as Bowling, Chess, Precision Throw, Basketball, Scrabble, Shuffleboard, Golf, Skee-Ball and Wheelchair Slalom!

Inglis staff and more than 100 volunteers joined us as buddies for each athlete and to cheer for all the athletes. volunteers came from many of the area schools such as Drexel University, University of Pennsylvania, Haverford College, Weidner University and many others. Thanks to all our volunteers who truly make this event possible.

Named in memory of former Inglis Board member Alice Lightner Keen, the Games give Inglis residents the opportunity to participate in a variety of competitive events. The Keen Games began as the Centennial Games in 1976 as Philadelphia celebrated its Bi-Centennial and Inglis House, its Centennial. The Games were created by Mrs. Keen and Inglis House Director of Recreation Alice Nagle. Due to the Games’ success, they became an annual event at Inglis.

Special thanks to the Social Enrichment Program staff who have been coaching the athletes and planning this year's Keen Games since June! Thanks again for an amazing Keen Games!

View photos from the event!