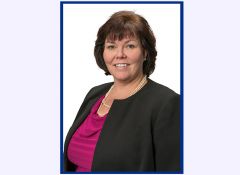 Philadelphia, PA (June 8, 2017) – The Inglis Board of Directors is pleased to announce the appointment of DYANN M. ROTH as Inglis’ new President & Chief Executive Officer. An exceptional executive and visionary leader, Ms. Roth has helped her current organization, Resources for Human Development (RHD) through its rapid growth and expansion while helping it stay focused on mission and keeping up with the pace of the change.

Ms. Roth will be the first woman to serve as President & CEO of Inglis, following the strong history and tradition of the women who founded and ran the 140-year old organization.  "I am incredibly excited to have the opportunity to join the Inglis community,” said Ms. Roth, “to learn from and work with the people Inglis supports each day to live as independently and fully as possible.”  She will assume her role beginning August 21, 2017 and succeeds Gavin Kerr, who joined Inglis in 2008 and is retiring.  “I am delighted to hand off leadership of Inglis to Dyann, who is a deeply mission-driven, genuinely compassionate and highly capable leader,” said Mr. Kerr.

“We are delighted to welcome Dyann as Inglis’ next CEO,” said Lauren DeBruicker, Chair of Inglis’ Board of Directors.  “She is a skilled leader, an entrepreneurial thinker, and recognizes the people we serve as we all wish to be recognized: as the individuals we are.   Annie Inglis, and the many women who made the organization what it is today, would be proud to know Dyann will be leading Inglis into its next generation,” DeBruicker said.

Ms. Roth is currently the Chief Executive Officer/President of RHD – a diversified human services not-for-profit based in Philadelphia, with more than 160 programs across 15 states supporting people with disabilities and other vulnerable populations. She began her association with RHD working part-time throughout high school and college.  Beginning in 2008, Ms. Roth was selected for future executive leadership within RHD, and held significant operational roles until 2013 when she was chosen as the next CEO. "Ms. Roth and RHD helped more than 40 social entrepreneurs through the organization’s incubator, helping them take their not-for-profits from idea to reality.

Since becoming CEO of RHD, Ms. Roth has significantly enhanced the operations of the 47-year-old organization and led the creation of its first strategic plan.  Today, RHD has more than 6,000 employees with a $268 million annual operating budget. RHD’s programming focuses on intellectual and developmental disabilities, behavioral health, homelessness, addiction recovery and more. Under Ms. Roth’s leadership, RHD has been honored multiple times by the Philadelphia Business Journal as one of the city’s Best Places to Work.  Ms. Roth received her Bachelor of Arts from Penn State University and her Masters of Science in Organizational Dynamics from the University of Pennsylvania.

“Dyann brings a wealth of experience to this role and her passion for Inglis and our mission was palpable throughout the selection process,” said James Logue, Chair of the Selection Committee and Vice Chair of Inglis’ Board of Directors.  “She is a focused and thoughtful leader who understands both the challenges and opportunities Inglis faces in the years ahead.  The search committee is confident her collaborative style, engaging manner and commitment to those we serve provides the perfect fit for Inglis,” said Mr. Logue.

Mr. Kerr departs Inglis as the disability services organization concludes its celebration of its 140th Anniversary.  During his nearly decade-long tenure, Inglis has grown and transformed its operations in numerous ways.  Inglis has focused on enhancing its support of people with disabilities who choose to live independently through the development of more than 230 new affordable, wheelchair-accessible apartment units (completed or already in the pipeline) making Inglis the largest developer of this type of housing in the region; expansion of the Community Computing Program funded by The Pew Charitable Trusts; expansion of the Inglis Day Program; and implementation of the Inglis Virtual LIFE program.

Major advancements have also taken place within Inglis House, the organization’s long-term care community.  During Mr. Kerr’s leadership, Inglis House has transitioned to a fully Person-Centered Care (PCC) environment, with more opportunities for people with complex physical disabilities articulate their choices, maximize their abilities and achieve their goals. Mr. Kerr led the renovation of outdated “nursing units” into thriving PCC “Neighborhoods” – each with input from their respective residents; upgrades to the dining experience with each neighborhood having a designated homemaker - providing made-to-order meals in each neighborhood’s solarium (communal dining area) and more.

Since Mr. Kerr came to Inglis, the organization has enhanced services and care available to people with disabilities by working with every college and university health program in the area, providing internships and hands-on training for the next generation of doctors, nurses, social workers, therapists and more – ensuring that people with disabilities will be cared for by clinicians and care providers who understand and have experience in the unique needs of this population.

“A select few of us have been privileged to lead this remarkable community,” said Mr. Kerr. “Each of us has endeavored to improve the lives of those we serve and our great staff who serve them.  I am proud that the Inglis Dyann will lead is an even better place than it was 9 years ago when I first arrived,” he said.

“Inglis is the Crown Jewel of long-term care” says Inglis House resident and Treasurer of Resident Council, Mary Czyzyk.  “We have so many things available to us. And should a question arise to try something new, they’re willing to work with the administration and funds and see what we can do…It’s a great place,” said Ms. Czyzyk.

“Inglis’ strong history and commitment to mission, person-centered values, and innovation will serve the organization for decades to come, and I am looking forward to being part of that future," Ms. Roth said.

The Inglis Community is also looking forward to the future with Ms. Roth.