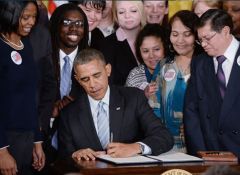 In an article on the Disability Scoop website, they say, “An executive order requiring federal contractors to be paid at least $10.10 per hour will apply to workers with disabilities too, White House officials say. President Barack Obama signed an executive order Wednesday raising the minimum wage for federal contract workers, including those with disabilities employed under service or concessions contracts with the government.”

Read the full article “Under Obama Order, Workers With Disabilities To Get Pay Hike” here. (opens in a new window)