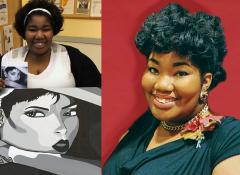 Inglis resident Ashley Murphy-Moore is a talented artist who wants to become an art therapist. She came to live at Inglis House one year ago, largely drawn by the opportunity to gain an education and the skills necessary for independent living. Three times a week, Ashley works with Therapeutic Educator Angela Carillo to study for the entrance exam to Community College of Philadelphia. Her plan is to complete the necessary studies at CCP, then transfer to Temple University to begin work on her Art Therapy degree. Ashley’s determination, combined with the tuition assistance offered by Inglis’ Leslie P. and Shelly Ross Golden Education Fund, are a powerful combination for success.

Because she is so highly motivated, Ashley also continues to work part-time in retail at Macy’s. “I feel strongly that I want to be out in the community, building real skills at a real job,” she says. And she must be doing it well, because after moving to Inglis in 2014, Macy’s quickly found her a position at a nearby store. Inglis employment services helped Ashley transition to her new workplace by advocating for her to receive CCT Connect Shared Ride Program services, which were initially denied. “We discovered that the sidewalks were inaccessible, making it impossible for her to use SEPTA public transportation,” says Barbara Duffy, of Inglis Community Employment Services (ICES). “Also, the only accessible entrance would have forced her to drive her wheelchair through a parking lot, which is not safe. Using CCT, Ashley is able to avoid these issues. ICES also assists Ashley with her scheduling and provides an assistive device to enable her to do her job better.