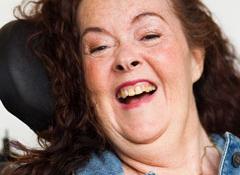 Betsey Mills can light up a room with her friendliness and ready smile. From her easy-going demeanor, you’d never guess that she’s helping to fight war crimes and atrocities on a global scale.
Yet, on any given day, you’ll find Betsey translating legal material from French to English for refugees in the most violent, impoverished areas of the world.

Residents like Betsey make an impact in places that none of us would ever have dreamed and your gift to The Ability Fund helps people like Betsey achieve their goals.

“My work is part of my brother TJ’s asylum efforts for the United Methodist Committee on Relief (UMCOR),” says Betsey. “He’s an attorney for UMCOR. He needs a French translator because so many of his cases come from French-speaking countries in Africa and Asia.”

Betsey is eminently qualified to fill this need: a graduate of Yale, she is fluent in French, has taught overseas, and is the Editor Emerita of the Southwest Review, one of the best known and well-respected literary quarterlies in the country.

Betsey and her brother were involved with foreign issues early in life. Both are widely travelled. But now, because of multiple sclerosis (MS), Betsey helps TJ by doing her translation work from the Inglis  computer lab. The mechanics of it aren’t easy. Due to vocal weakness stemming from MS, voice-activated software is no longer an option for Betsey. She types with the aid of a button and each keystroke can take several clicks. “It can be very frustrating,” she admits. “I have a volunteer, Dominic, who helps me transcribe sometimes. He’s a great help.” 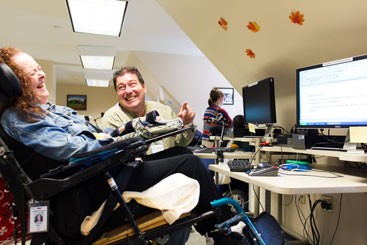 Anyone who knows Betsey is well aware that she’s a “can do” person who gets things done. Thanks to her language skills, the Inglis computer lab and our group of special volunteers, she’s making a difference in the lives of people half a world away.

The Ability Fund, the Annual Fund of the Inglis Community, enables Betsey and other Inglis consumers to reach their potential with adapted computing, recreational activities, accessible living facilities and many more specialized programs and services.

Make your gift today to The Ability Fund