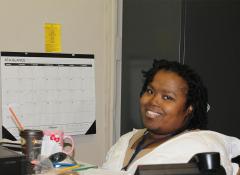 Latoya Maddox, a resident of Inglis Gardens at Germantown, is a former Inglis House resident who has achieved several personal, professional and educational milestones. Now an administrative assistant at Liberty Resources, Inc., in Philadelphia, and mother of four-year-old Emmanuel, Latoya’s goal is to become a social worker serving people with disabilities. “When I began taking courses at Community College of Philadelphia, I really enjoyed studying behavioral health,” she says. “I continued on and am now a part-time student majoring in social work at West Chester University. I will have my bachelor’s degree in two years, and my master’s a year later.”

Latoya lives with Arthrogryposis Multiplex Congenita, a condition that affects the range of motion in the joints. A person with Arthrogryposis has joints that are in a permanently flexed or extended position. Despite this challenge, Latoya has mastered the art of writing with a pen in her mouth, producing beautiful penmanship that is just one example of her determination.

Although she has been living independently for 12 years, Latoya is glad to have settled at Inglis Gardens at Germantown. “I’ve lived other places, but the set up in my current apartment is so much better,” she says Latoya. “For example, I can actually cook for myself, which I couldn’t do before moving here.”