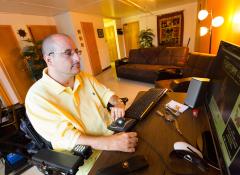 When Micki Greenstein, who lives with paraplegia, was almost 21, he knew he’d have to move out of the Woods School, where he’d lived since  his diving accident as a young teenager. Then, a bus driver at the School took him to see Inglis House and Micki knew he’d found a new home. “Living at Inglis House helped me to learn just how much I was capable of doing on my own,” he says.

Several years later, a friend who lived in Inglis’ Morris-Klein Apartments told Micki about a vacancy there. “I was skeptical but realized that he had even less mobility than I do,” he says. Since moving into his apartment in 2002, Micki has never looked back. In fact, he has earned a college degree, worked as a volunteer coordinator and even helped others make the same transition.

However, Micki admits there have been challenges. “Back then, after your caregiver left at 9 p.m., you were completely alone. That was difficult, but I got over it,” he says. Now, when others are considering making a move they come to Micki for answers and advice.